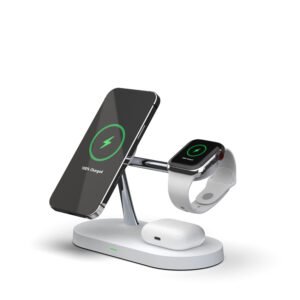 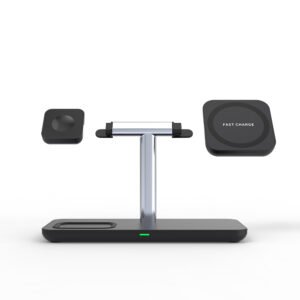 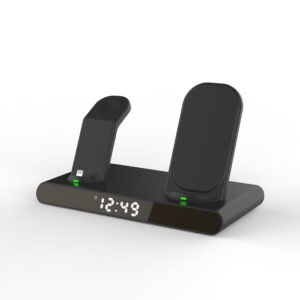 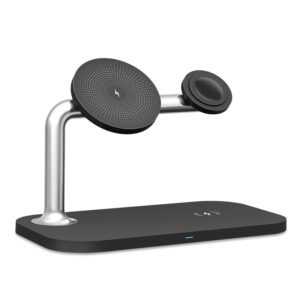 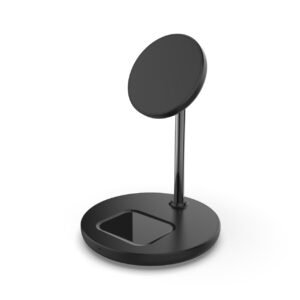 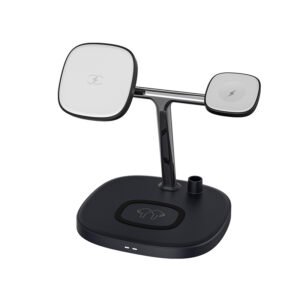 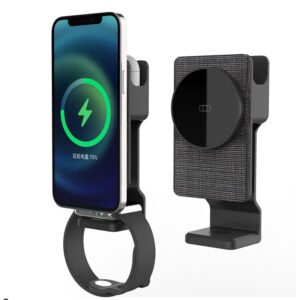 HY-056 3 in 1 Wireless Car Charger for Phone, Airpods and Watch 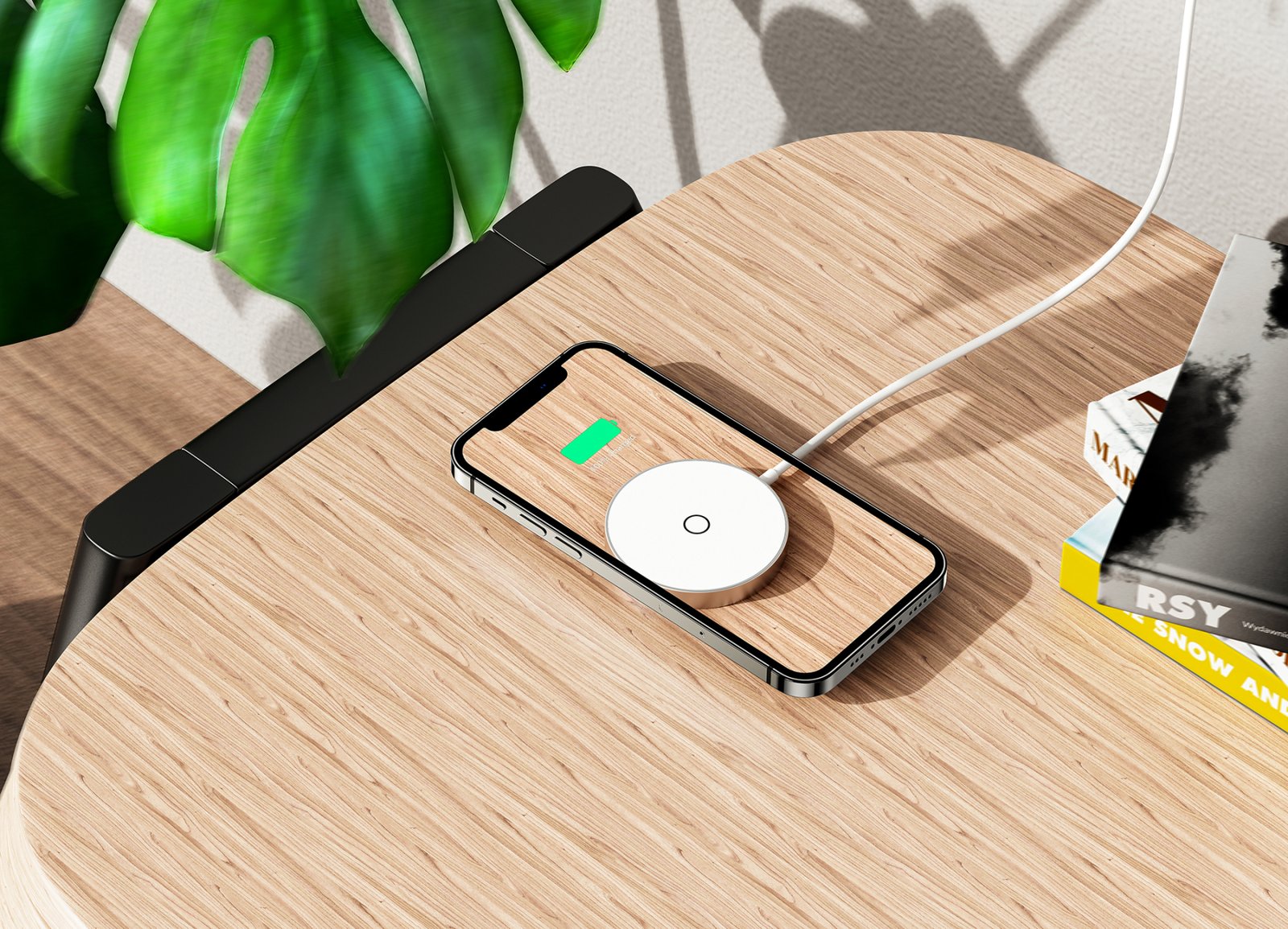 On October 14, 2020, Apple officially released MagSafe technology in the form of an online live broadcast at its second autumn conference. It was used in mobile phone accessories, magnetic charging equipment, and other product lines. MagSafe magnetic charging The magnets attach to the back of the new iPhone, similar to the Apple Watch’s charger, and can charge the iPhone 12 and iPhone 12 Pro and above at a faster 15W.

Since the price of this accessory has enough profit space and market, major third-party manufacturers have been expecting Apple to open third-party certification for production and sales, which has lived up to expectations. Apple is expected to open the 15W MagSafe magnetic wireless charging certification on the eve of the 13 release.

Apple announced: “We are excited to announce the new Apple MagSafe Charger Module! This module provides up to 15W of secure wireless charging and can be integrated into MFi accessories to wirelessly charge Apple devices via MagSafe.

Accessories that integrate this module and complete MFi certification will be able to use the Made for MagSafe badge on product packaging and communications. ”

As Apple further improves the wireless charging mechanism, adding two new sensors enables it to better identify the charger, and use MagSafe to magnetically attract cardholders, wireless chargers, etc., even through the phone case. The first MagSafe magnetic charger for the iPhone 12 can be attached to the back of the iPhone, and Apple has also introduced the MagSafe Duo, a foldable charger that can charge the iPhone 12 and Apple Watch at the same time.

Anyone with a discerning eye can see that the magnetic charging on the iPhone 12 is essentially a compensation for the lack of AirPower. When Apple showed AirPower in 2017, they said their own charging concept: I hope consumers can charge anytime, anywhere, and unfettered. AirPower is also designed with the goal of “charging as soon as it is released”, but in order to achieve this goal, Apple has set up as many as 22 coils on AirPower, and its internal communication and heat dissipation has become a big problem. After a year and a half, Apple announced that it would abandon the research and development of AirPower. However, from the perspective of Apple’s opening of the wireless charging certification MFI, Apple has not completely abandoned AirPower, and “charge and discharge” is still the direction of Apple’s efforts.

How to join MFi and enjoy the bonus brought by MagSafe?

The MFI application process steps are as follows:

►After successfully passing the first level, in the second step, Apple needs to conduct an MFI factory audit (System Review), and assign a third party to the factory for on-site inspection;

►After completing the factory audit, the third step is to declare a product plan (PPID). Apple MFi has strict management specifications. Every Apple accessory product must be declared to and approved by Apple during the research and development stage;

►The next step is the certification test. Send samples to Apple’s lab to test the product.

►After completing the test, go to the fifth step, upload the product packaging to receive Apple’s review, Apple also has strict standards for the packaging of accessories, and must meet the regulations before batch printing;

After all the above steps are completed, it can be called MFI certification by Apple, and enterprises can purchase authorized chips/components from Apple for mass production and sales of products.

HY-056 3 in 1 Wireless Car Charger for Phone, Airpods and Watch 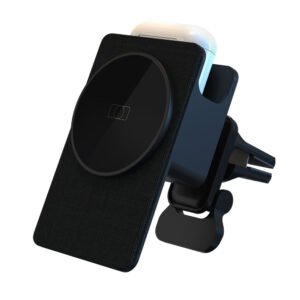 2 in 1 Wireless Car Charger for both phone and airpods 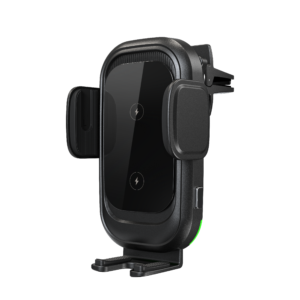 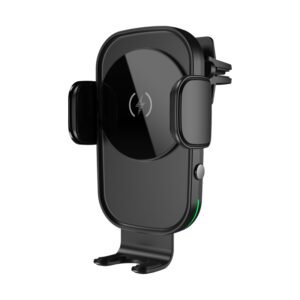 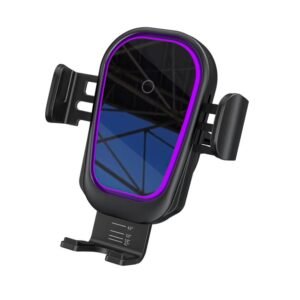 Following up the most advanced charging technology and Specialized in chargers more than 20 years.

We have confidence to advise solutions for you.

We will contact you immediately and advise a possible sample soon once we received your inquiry.

Ask For A Quick Quote

We will contact you within 1 working day, please pay attention to the email sent by CowinLink Limited Team.